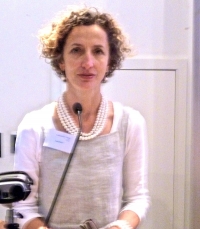 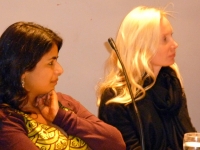 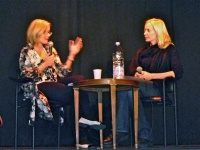 The conference The Diasporic Family in Cinema was held on 21 May 2011 and co-hosted by the Department of Media Arts at Royal Holloway, University of London, the Centres for Film and Media Studies and Migration and Diaspora Studies at SOAS, in association with the Screen Studies Group of the University of London and the Ciné Lumière. It aimed to bring together people whose academic and professional paths might otherwise not cross. Most importantly, the conference provided a platform for an exchange of ideas and perspectives between academia and the film industry.

Podcasts of this conference are available here.

It also brought together scholars with expertise in Hollywood, Bollywood and transnational European cinema and provided an opportunity for several members of the AHRC-funded Research Network Migrant and Diasporic Cinema in Contemporary Europe (www.migrantcinema.net) to continue their past collaboration, but with a new focus. Conference presentations and the film screenings of I for India (Sandhya Suri, UK 2005) and When We Leave (dir. Feo Aladag, Germany 2010) were centrally concerned with the impact of transnational migration upon the social and emotional fabric of the family. Surprisingly many papers focused on father figures, which probably reflects the prominent place assigned to family patriarchs in diasporic family narratives. The typecasting of diasporic fathers as patriarchs, whose authority is based on clearly demarcated gender roles and power hierarchies that are hard to reconcile with Western notions of gender equality, made it imperative to take a close look at the widespread practice of ethnic stereotyping in diasporic family films.

With its focus on Hollywood’s Italian-American fathers, Professor Stella Bruzzi’s (University of Warwick) keynote address set the tone for much of what was to follow during the day.  Considering House of Strangers, Bloodbrothers, Moonstruck and Saturday Night Fever, amongst other seminal films featuring Italian immigrant fathers, she identified two particularly prominent stereotypes: the benign and caring pater familias and his excessively violent counterpart. Yet whether good or bad, what defines the Italian-American father is his attachment to Italian culture, reflected in a thick accent, a passion for opera and a love of Italian food enjoyed in the circle of his family. And then, of course, there is Vito Corleone in The Godfather, who combines family values with organized crime. Italian-American directors played a key role in the ethnic stereotyping of the Italian diaspora, which was perhaps an easy target at a time when diaspora and minority consciousness was less developed than it is today. Professor Rachel Dwyer (SOAS, University of London) offered a wide-ranging analysis of the representation of the imagined Indian family abroad. Examples, illustrated by colourful and entertaining film clips, included the path-breaking diasporic romance DDLJ, and family melodramas such as Kal ho na ho and Kabhi alvida na kehna. The phenomenal success of these films, especially amongst NRIs, is partly due to the spectacle of unimaginable wealth enjoyed by NRIs in a fantasy diaspora, and partly due to the casting of Bollywood superstar Shah Rukh Khan in many of these films. Harking back to the theme of the keynote address, Professor Carrie Tarr (Kingston University) discussed the representation of fathers in contemporary Maghrebi French cinema. Whereas in most films of the 1980s, the Arab-Muslim father (if present at all) represented a negative influence by obstructing his children’s ability to integrate into French society, recent productions tend to conceive of the relationship between the generations in more amicable terms. Comedies such as Mauvaise fois and L’Italien imagine the diasporic family as open to other faiths or as a secularized hybridized French family.  The rehabilitation of the family patriarch was also addressed by Dr. Claudia Sternberg’s (University of Leeds) in her in-depth analysis of West is West. In this sequel to the British box-office hit East is East, set in Salford during the 1970s, the shifts in time and place (West is West is set seven years later in George Khan's 'other' family home in Pakistan) result in the emergence of trans-ethnic commonalities (e.g. between George Khan’s two wives) and the strengthening of transnational family ties. Dr. Daniela Berghahn (Royal Holloway, University of London) considered the proliferation of wedding films in diasporic cinema, comparing Monsoon Wedding and Evet, I Do!, a Turkish German comedy that takes its narrative and generic cues from the popular ethnic rom com My Big Fat Greek Wedding. She proposed that these films reconcile the conflicting demands of tradition and modernity, typically imagined as the dichotomy between arranged marriage and western notions of romantic love, by using the formation of the heterosexual couple as a trope for cultural hybridization.

The screening of Sandhya Suri’s documentary I for India offered a welcome break between the morning and afternoon presentations. Suri’s multi-award-winning documentary is a chronicle of immigration in Britain, from the 1960s to the present day, as seen through the eyes of the filmmaker’s own family and her father’s movie camera. Sandhya Suri was able to use an extensive archive of cine letters and tape recordings, which her father Yash Pal Suri, a surgeon based in Britain, and her uncle, based in Meerut, India, exchanged over a period of forty odd years. Conference delegates appreciated the opportunity to discuss this intensely personal film with the filmmaker in a Q&A after the screening. Since the film was not widely released in the UK, for many delegates the screening at SOAS’s Khalili Lecture Theatre was a genuine discovery of a very important diasporic family film. As one conference delegate commented, “I felt it was extremely important to have a first-hand illustration of a real diasporic family and their experiences. The documentary certainly confirmed the issues raised throughout the conference and supported the idea of the idea that diasporic family films have universal appeal.” In the Q&A Sandhya Suri elaborated on her aesthetic choices and on the difficulties she faced when selecting footage from the vast archive of material she was given by her father.

The roundtable discussion aimed to explore how filmmakers/producers negotiated between their artistic ambitions, funding opportunities and the market place in their construction of diasporic family life on screen. The panelists were Dr. Feo Aladag, writer/director/producer of When We Leave, Sandhya Suri, writer/director of I for India, Leslee Udwin, producer of the Asian British comedies East is East and West is West, and Dr. Gareth Jones, writer/director/producer of Desire and founder of BABYLON, an audiovisual development programme assisting filmmakers of migrant and diasporic origin to break through into the mainstream. The diversity of these family portraits underscores that there is no such thing as 'the diasporic family', even if the title of the conference may have implied a more essentialist understanding.  When We Leave is about an honour killing in a Turkish German family;  the documentary I for India charts the gradual assimilation of an Asian British family and their transnational connections with their extended family in India; West is West explores the encounter of George Khan’s British and Pakistani-based families, while Desire is a chamber piece about the intimate encounter of a white middle-class British family and a black woman from Francophone Africa. Although each of the panelists had their own, equally fascinating story to tell about what inspired them to create these family portraits, they all agreed that stories about families have universal appeal. Films about the family invite audiences to recognise shared experiences and feelings and identify with ‘the other’. “We are all people. We are all the same”, and films about family life emphasise this common ground, Leslee Udwin commented. According to Feo Aladag, family relationships function as a metaphor for wider cultural issues.  What makes the family particularly fascinating for her is that the emotional dynamics inside a family are highly complex, “and so, a lot is at stake”. For Sandhya Suri, the family archive she inherited was merely a point of departure. She was not interested in showing herself "having a cosy chat with her immigrant parents" but instead wanted to convey “the epic quality” of the diaspora experience “in a beautiful, cinematic and carefully considered way”. Meanwhile, Gareth Jones approached “the family as a microcosm” in a very pragmatic fashion. “I simply could not afford the macrocosm!”

An interesting and lively debate ensued during which the film professionals compared notes on the mechanisms of film funding. When Dr. Sarita Malik (Brunel University), who co-chaired the discussion with Daniela Berghahn, asked the panellists to assess funding opportunities in the UK and elsewhere in Europe, there was a general consensus that Germany offered by far the best resources and the most democratic selection procedures. Sandhya Suri and Feo Aladag had both benefited from the German system for their début film projects. Leslee Udwin gave a vivid account of how things had changed in Britain since she made East is East in the late 1990s, although even then, it had not been easy to convince people that a film about an Asian British family would appeal to audiences beyond Southall. With the demise of cultural diversity funding initiatives and the UK Film Council, raising production funds for West is West was a huge challenge, which Udwin eventually mastered with the support of BBC Films and private investors.

A further concern of the roundtable discussion was the issue of ethnic stereotyping and, in particular, the question how diasporic family films intervene with on-going media debates about migration and ethnic minorities. With When We Leave, Feo Aladag intended to give a more nuanced and balanced perspective on the controversial issue of honour crimes. In the mass media, the father and the brothers are "invariably depicted as monsters, it's all in a very black-and-white fashion”. Aladag, in contrast, wanted to show that everybody in a family in which an honour killing is committed suffers and is traumatised. She invites the audience to empathise not just with the female victim but also with the male perpetrators. Another issue on which the roundtable discussion touched several times was what Kobena Mercer famously referred to as “the burden of representation”. Leslee Udwin confirmed the concerns Mercer had raised with reference to black independent film in Britain during the 1980s, stating apodictically: “A film cannot be an ambassador for an entire race”.

The conference concluded with a well-attended public film screening of When We Leave at the Ciné Lumière and  a stimulating Q&A with Feo Aladag. The film, which was Germany’s Oscar nomination for 2011 and which has garnered a long list of prestigious awards, has so far not found a UK distributor. It was, therefore, particularly rewarding to be able to make this important film accessible to a cinéphile audience who was eager to discuss not just the film’s political and humanist message but also its remarkable cinematography.

All conference presentations and the roundtable discussion are available as Podcasts on this website. Your comments, thoughts and further feedback are most welcome!