Families, families everywhere. Some thoughts on families at the Berlin Film Festival 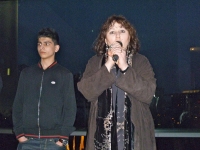 Aqib Khan, who plays Sajid Khan in 'West is West', and producer Leslee Udwin at a Q&A session at the Berlin Film Festival 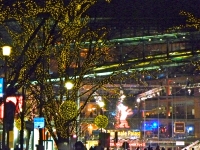 Impressions of the Berlinale 2011

At this year’s Berlinale, there are so many films about families that it almost seems as if Dieter Kosslick and his colleagues had been meaning to do me a favour when they put together the programme of the 61st Film Festival…Or has the family recently emerged as a particularly popular theme, or is it simply that my own perception has changed? Working on the diasporic family in cinema, films about family life suddenly seem omnipresent…they probably always were, only I did not notice before.

On the whole, filmmakers appear to be far more intrigued by dysfunctional families than by happy ones. Maybe because ‘happy families are all alike; every unhappy family is unhappy in its own way’ - as Leo Tolstoi famously remarked. Films about the family showing at the Festival, such as Follow Me (dir. Johannes Hammel), Yelling to the Sky (dir. Victoria Mahoney) or Die Vaterlosen (dir. Marie Kreutzer) certainly suggest that family dysfunction comes in many shapes and forms – and that’s what Tolstoi must have had in mind. But at the same time it seems to me that families are so ubiquitous in cinema because in some way or other all families are alike, or rather, there is something universal about the family. Once we were all children, most of us experience what being a mother or a father is like. That’s why we can all relate to narratives about the family and identify with families whose cultural background may be rather different from our own.

In a Q & A session following the second sold-out screening of West is West (dir. Andy DeEmmony) at the Berlinale, producer Leslee Udwin explained that trying to sell a film predominantly set in Pakistan is not all that easy these days. Many people in the West are prejudiced, associating Pakistan all too readily with Islamic fundamentalism and terrorism. But in test screenings West is West did phenomenally well since this heart-warming sequel to the box office hit East is East (dir. Damien O’Donnell) invites audiences all over the world to recognize that families, whether they come from Pakistan or from Europe, have a great deal in common. The experience of family life is one that unites humanity and that, therefore, has the capacity to build bridges across cultures and to help us reassess racial, religious and other stereotypes. In that sense, Leslee Udwin explained, even an apolitical feel good movie like West is West aims to fulfil an important mission.

West is West could be subtitled ‘George Khan’s redemption’. When Pakistani-born George Khan, who has been living in England for some thirty-five years and has been running a Fish & Chip shop in Salford, together with his English wife Ella, realizes that his youngest son Sajid rejects his Pakistani heritage, he takes him on an educational trip to his other home and first wife in Pakistan. But it is not just Sajid who gets an education in this remote place. It is really George, the overbearing, wife-beating patriarch, whose attitude towards women caused some controversies, especially amongst feminists and the British-Pakistani community, when East is East was released more than ten years ago, who has to learn his lesson. And it is his two wives, Mrs. Khan No. 1, whom George abandoned leaving her to raise their children on her own, and Mrs. Khan No. 2, who are his teachers. George gets a real beating in this film as his wives gain the upper hand and, eventually, he has to admit that he has failed both his families. Sending remittances and barely answering the letters sent from Pakistan was simply not good enough.  And trying to impose a Muslim-Pakistani value system onto his family in Britain without recognizing the need to adapt to the rather different cultural norms around him alienated his children and caused tension in the family. But after all, West is West is comedy and so, in the end, George realizes the errors of his ways and makes peace with both his families, returning to Britain a sadder and a wiser man.

A real discovery for me was Almanya – Willkommen in Deutschland (Almanya – Welcome to Germany), the début feature film of Yasemin Samdereli (director and script) and her sister Nesrin Samderelli (script), which premiered at the Berlinale. This witty and beautifully shot film about the migratory history of the Yilmaz family from Eastern Anatolia to Germany’s industrial heartland, the Ruhrgebiet, is not only truly heart-warming and very funny, it also is a real stereotype buster! The film takes the historical landmark of the arrival of the one-millionth guest worker in Germany on 10 September 1964 as its narrative starting point and mixes, fact and fiction in a tongue-in-cheek fashion.  Almanya centres on guest-worker number one-million-and-one, Hüseyin Yilmaz, who would have been given the moped and all the media attention which Armando Rodriguez de Sá from Portugal actually received, had he not kindly let Rodriguez go ahead of him.

What makes Almanya refreshingly different from earlier films about labour migration, such as the Oscar-winning Reise der Hoffnung (Journey of Hope, dir. Xavier Koller), Winterblume (Winter Flower, dir. Kadir Sözen) or Shirins Hochzeit (Shirin’s Wedding, dir. Helma Sanders-Brahms), is that it purposely eschews the miserabilism and moral indignation at the plight of ‘Turkish victims’ of the ‘cinema of the affected’. Almanya glosses over the hardship encountered by labour migrants without being disingenuous. This kind of embellishment is legitimised by the narrative device of what almost amounts to a fairy tale of migration and integration and the transformative power of a child’s vivid imagination.

That child is Cenk, Hüseyin Yilmaz’s little grandson, who is not quite sure whether he is German, or Turkish, or indeed both. In answer to this question, his cousin Cana, tells him how it all began in a remote Anatolian village and how the Yilmazes came to live in Germany two generations ago.  Her narrative is translated into brightly coloured images and dreamlike sequences of magical realism. But this is not the only way in which Almanya reconfigures earlier cinematic accounts of Turkish German migration and diaspora. In contrast to most other films in which the Turkish migrants are ‘othered’, in this film, the Germans are ‘the other’. Whilst the Yilmazes speak perfect, accent-free German, the Germans speak an invented language which neither the Yilmazes nor the audience can possibly understand. It sounds a little bit like a mixture between Swiss German and Danish, with lots of consonants and ös and üs. And from the vantage point of the Turkish migrants, the German ‘Leitkultur’ (majority culture) appears rather peculiar: they put their dogs (which actually look like giant rats) on a leash and take them round the block for a walk, the food they eat is very strange indeed, not to mention their religious practices…In this topsy-turvy world, a mirror is held up to German majority culture, inviting the ‘natives’ to marvel at their own ‘otherness’.