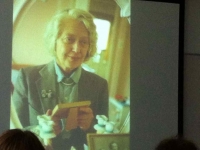 Rosy Martin performing the memory of her mother

I was recently invited to give a Keynote address on 'Diasporic Families and the Production of Locality in European Cinema' at the Picturing the Family conference. Papers and artist presentations at this conference explored how concepts of family and alternative forms of kinship have been acted out, reinvented, or deconstructed, through various media including the visual arts, literature, and museum exhibitions, across the centuries. The family picture was considered both in its figurative and artefactual forms, including literature, film and photography.

Professor Martha Langford (Concordia University) gave the introductory Keynote 'Indefinite Articles: Family Photographs as Objects of Research', in which she shared some photos from her own family album, examining her mother Lucille's European tour at the time of the Cold War, in relation to the significant body of literature on family photography and memory, including her own seminal contributions to this field. Professor Annette Kuhn's (Queen Mary, University of London) Keynote 'Family Misfortunes: Mutations of the British Social Film' traced the realist aesthetics of British family-themed films, giving an impressively wide ranging account that ranged from kitchen sink drama over Loach's Family Life to The Arbor.

The conference also provided a platform for several artists, including Rosy Martin, Lizzie Thynne and Nick Bird, who are members of the Family Ties Network to present their fascinating work. The work of Family Ties artists was showcased at an exhibiton at The Petz Gallery in London.