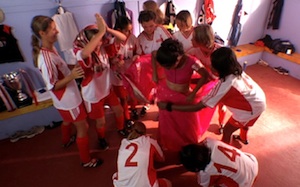 Jules hopes to play for the US Women's League, but is discouraged by her mother who worries about her apparent lack of interest in boys, unaware that Jules has a crush on the team's coach Joe. Joe recognises the potential of both women, but becomes aware of the obstacles Jess faces due to her parents' attitude.

Joe is forced to help with the preparations for the wedding of her older sister Pinky, and is then banned from playing football for shaming the family by exposing her legs in shorts. Pinky's future in-laws assume that Jules is Jess' 'boyfriend' and break off the engagement. Jess resorts to playing in secret. At an away match in Germany, the growing attraction between Jess and Joe causes Jules to break off her friendship with Jess. At the league semi-final, Jess is sent off for retaliating against racial abuse. She returns home to find that Pinky's wedding is now going ahead - on the date of the final, where a US team scout will be present. Despite pleas from Joe and a conciliatory Jules, Jess is resigned to never playing again.

At the wedding party, Mr Bhamra realises Jess' misery and tells her to slip away to play in the second half of the final, where she scores a goal. Jess and Jules are both awarded scholarships to the US; and Jess' romance with Joe looks set to continue.

You would be hard pressed to find anyone in the world today who had not heard of the name David Beckham. With legions of adoring fans, the boy band good looks, a pop star wife, and the responsibility of captaining the national football team under his belt Beckham has all the requirements necessary to be a global megastar. And now the Beckham brand has made its way onto the silver screen with the new feature film Bend It Like Beckham arriving in British cinemas, the title of which derives from the eponymous England footballer David Beckham and his unique ability to curve a football from dead play situations. However the film is not in fact about David Beckham per se but rather a demonstration of how his level of superstardom has the ability to cross boundaries within society and influence people from all walks of life regardless of cultural background.

Bend It Like Beckham is the story of teenage football fanatic Jesminder Bharma (Parminder Nagra), 'Jess' for short, and her struggles with juggling her passion for the beautiful game, and David Beckham in particular, and the traditional Punjabi values that her devout Sikh family want her to adopt. Set in the West London suburb of Hounslow, the film begins with Jess' only means of fulfilling her infatuation for football, divided between watching hours upon hours of David Beckham's greatest moments on her TV and the occasional game in the park with a group of boys. This is until her skills catch the attention of Juliette 'Jules' Paxton (Keira Knightley) a fellow football enthusiast who one day dreams of playing in America, who also faces friction at home from her overbearing mother who wishes that she would behave more like a conventional girl and find herself a boyfriend. So impressed is Jules by Jess' footballing prowess that she invites her for a trial at the local women's team, of which Jules is a member. While at the trial Jess catches the eye of the Irish head coach Joe (Jonathan Rhys Meyers), a former footballer himself who has resorted to coaching as a result of a serious knee injury, who asks her to join the team as a permanent member and although she is initially reluctant through fear of repercussion should her parents find out Jess eventually obliges. We follow Jess on her journey as she becomes a fully-integrated member of the team and helps the team to reach the final of the cup, while at same time attempting to conceal her footballing escapades from her disapproving family.

The film is directed by Gurindar Chadha a Kenyan-born British filmmaker of Sikh Indian origin who moved to Southall, West London at the age of 2. Her previous work includes the documentary shorts I'm British But...and What Do You Call an Indian Women and from these titles alone it is apparent that she is treading familiar ground when she addresses issues such as national identity and gender politics in Bend It Like Beckham. Therefore having made a name for herself in the realms of documentary by exploring ideas of minorities finding their place in contemporary Britain and creating social commentary films around such issues then it is understandable that she has chosen to delve into the world of fiction with a film that is intended in very much the same vein. Even if we were to examine the film's soundtrack we would find a mixture of bhangra music and British chart pop including tracks from the likes of Victoria Beckham, wife of David, and her former band mate Melanie C, we can see the eclectic mix of music from these two different cultures add greater emphasis to the idea of cultural diversity that is woven into the very make-up of the film. However this does not mean that the film wishes its characters would embrace all the traditions that these two contrasting communities promote.  On the contrary, the film instead encourages Jess and Jules to break away from the patriarchal roles that they are expected to fit into in their respective cultures and as a result the film promotes individualism and non-conformity within contemporary society.

There are many aspects of Bend It Like Beckham that clearly indicate that Gurinder Chadha is hoping to attract a mainstream audience. Take for example the frequent use of expositional dialogue, it is obvious that the film is aimed at a broad audience and Chadha does not wish to alienate any audience members who may be unfamiliar with Punjabi culture and therefore attempts to explain certain factors through the characters' interactions with one another. Nevertheless this does not change the fact that several lines of dialogue come across as rather contrived and in the end this takes you out of the scene meaning you are no longer immersed in the story that is being presented to you onscreen. This kind of clumsy writing leaves the audience with a sense that they are being spoon fed information regarding the traditions of the Sikh religion. Regardless of what kind of audience for which you are aiming with your film there is one universal thing that all viewers do not like: the feeling that the film is talking down to them.

In addition to the dialogue coming across as rather ham-fisted and disjointed, a number of the lead performers, including Parminder Nagra in the lead role, appear somewhat out of their depth as their performances at times feel quite stilted and wooden. In the same way that the dialogue comes across as awkward in places and consequently unnatural, it was difficult for me to find these characters believable when their dialogue is delivered in such an inauthentic manner. Regrettably this is also coupled with a predictable and formulaic plot which offers up very few narrative turns which cannot be seen from a mile away and haven't already been done countless times before. If you cannot predict how the climax of Bend It Like Beckham is going to play out within the first 10 minutes of the film then you either need to get out more often or stay at home, stop going out all together and start watching more films. Because of this there is no suspense or tension in the narrative and thus the dramatic events that transpire do not have the emotional weight or dramatic impact for the film to really be considered a drama. Furthermore, although the film can be said to be at its best when mocking some of the outdated views by many of the more elderly characters in the film as well as the conflict that arises between them and the more open-minded teenagers these moments are so few and far between that they leave very little impact on the viewer. In fact the comedic moments in the film are so infrequent and are not anywhere near funny enough that it could be argued that the film does not even warrant the title of 'comedy' and as a consequence the film can neither be considered one genre nor the other. This sadly means that Bend It Like Beckham falls between the cracks between being a comedy and drama and instead becomes lost in relative obscurity as a consequence.

Which brings me on to my next point. In the original draft of the script it was intended that the characters of Jess and Jules would in fact turn out to be lesbians after all and that the two of them would end up falling in love with one another and end the film as a couple. However this storyline was in the end cut from the final draft of the script as it was deemed too controversial for more elderly and conservative Indians who may see the film, it is this point which inadvertently cuts directly to the heart of the issue with this film. Because the filmmakers are afraid of offending their audience in any way they refrain from taking any real risks with the narrative and thus the film lacks any kind of edge. The film never does anything truly bold or unexpected and instead tiptoes around any difficult subject matter that would make up a much more adventurous and daring story. Instead what we are treated to is a very conventional narrative structure which plays out exactly as one would expect with very few surprises along the way and where problems and obstacles are dealt with quite easily with minimal conflict. Perhaps the best thing that can be said about this film, as many other reviewers have chosen to describe it, is that it is 'rather pleasant'. Yet this can in fact be interpreted as a back-handed compliment as it suggests that although Bend It Like Beckham does have a certain charm and is rather enjoyable in places it does not do anything bold or unexpected enough to earn being described as anything more than 'pleasant' and that there is not much else that can be said about the film and thus it is in the end is a quite forgetful viewing experience which has no lasting impact and will unfortunately disappear into obscurity.