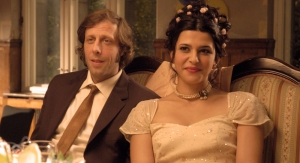 Set in contemporary Berlin, the multi-strand narrative of Evet, I Do features four inter-ethnic romances between Turkish-German, Kurdish-German, Turkish, gay and heterosexual couples all of whom want to marry one another.

The film’s central couple is the German student Dirk and his Turkish-German girlfriend Özlem. Turkish tradition prescribes that a proper marriage proposal does not just require for the man to elicit the magical words, ‘Evet, I do’ from the woman he loves, but that the father of the bride also gives his consent to the proposed marriage. Therefore, the film’s most important scene, repeated with variations for all three heterosexual couples, is the meeting between the bride and groom’s families. The living room is cramped, sweets and other refreshments are served and the support of Allah and the Prophet is invoked in this good and holy matter. Cultural differences will have to be negotiated.

Reverse class snobbery, a common trope of classic romcoms, is translated into reverse ethnic snobbery, whereby the ethnic minority family considers the majority-culture groom unacceptable. Dirk’s amorous pursuit of Özlem can only be accomplished by his readiness to ‘assimilate’ to Turkish culture. Significantly, Turkishness post-9/11 is defined first and foremost as Muslim identity. However, conversion to Islam is reduced to the performance of its allegedly most ‘alien’ or embarrassing ritual practice, circumcision, possibly in an attempt to de-demonise the spectre of Islamic fundamentalism.