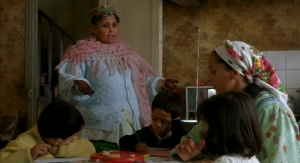 Set in the French town of St. Quentin, Yamina Benguigui's first feature film tells the story of French immigration from a women's perspective. It was inspired by the experience of the filmmaker's own mother, who like countless other women followed their husbands to France in the mid-1970s, following a change in French immigration legislation.

The film opens with the young woman and mother Zouina,  being  wrenched from her own mother  when embarking on a huge vessel at an Algerian port, together with her children and unsympathetic mother-in-law. Her arrival in France results in her virtual imprisonment in the confines of her home, where her husband Ahmed, supported by his mother, keep her locked away from the world around her. However, on Sundays, when her husband and mother-in-law make preparations for Eid and leave her alone, Zouina escapes from the house and tries to befriend Algerian and French women in her neighbourhood. Yet not everybody is sympathetic to her desire for independence. The film ends with Zouina asserting herself - at least to a small extent  - being granted permission by her husband to take her kids to school every day, an opportunity that will allow her to meet other women and gradually develop a life for herself in France. In this way, the film makes a plea not just for the liberation (defined as westernisation) of Maghrebi women but also for the integration of Maghrebi-French families in French majority culture.