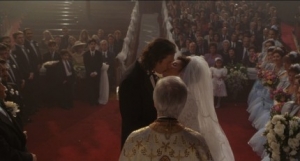 Toula and Ian's wedding in My Big Fat Greek Wedding

Toula Portokalos, the daughter of a Greek restaurant owner in Chicago turns from an ugly duckling into a swan when she falls in love with Ian Miller, a WASP high school teacher. Inter-ethnic romance is depicted as a transformative and mutually enriching experience. The couple overcome their parents' initial reservations and Ian is welcomed into the family circle of the large Portokalos family after he has converted to Greek Orthodox faith. Toula's and Ian's romance culminates in a lavish Greek wedding. As a wedding present Toula's father gives the young couple a house, right next to his, where the happy couple start a family and continue the Greek family tradition.

There are two kinds of people: Greeks and everybody else who wish they was Greek’ is not only one of the most memorable quotes from the 2002 hit romantic comedy My Big Fat Greek Wedding but,  it also describes the clash of cultures which the film centres around. Watching the film when it was released in the UK as a twelve-year old with a similar cultural and religious background (or as close as it was going to get in mainstream films), My Big Fat Greek Wedding portrayed a culture and characters I could identify with. The film’s depiction of an ethnicity which hasn’t featured prominently within cinema, when compared to Indian or Spanish cultures, was perhaps one of the main reasons for its success. Ten years later, My Big Fat Greek Wedding is still one of the most profitable films ever made, grossing over $368,744,000, having had a budget of only $5,000,000.

If you haven’t seen My Big Fat Greek Wedding (where have you been?), the film centres around Toula Portokalos (Nia Vardalos) a single 30 year old, second generation Greek American, who despite her family’s constant nagging to ‘marry a nice Greek boy’ falls in love with Ian Miller (John Corbett), a white Protestant high school English teacher with a ‘toast family’. Chaos ensues following Toula’s transformation from a subdued and dreary seating hostess in the family restaurant Dancing Zorba’s with an unhealthy obsession with beige to a vibrant career woman trying to adopt a less-Greek orientated lifestyle, as her choice of mate sends her father into frenzy. An overheated conversation, awkward baptism and gruelling family get-togethers later the couple finally marry, in a Greek Orthodox Church (where else?) and whether she wants it or not, Toulas’  getting her big fat Greek Wedding.

Written by Nia Vardalos, My Big Fat Greek Wedding is an autobiographical film conveying the actresses’ own experience growing up in a Greek family in Canada and then going on to marry a non-Greek (Ian Gomez who plays Mike in the film, the best friend of her on screen husband). Prior to 2002, Vardalos’ acting career mainly consisted of guest appearances in various American television shows and minor roles in a few unsuccessful films however; My Big Fat Greek Wedding brought her into the limelight and she went on to write three more films as well as the television sitcom My Big Fat Greek Life, but none have come close to matching the popularity and success of the 2002 hit. The film is also one of the more notable successes for director Joel Zwick, who like many of the cast and crew comes from a predominantly televisual background. Zwick did also experience distinguished success in theatre with the 1975 Broadway musical Dance With Me, for which he received a Tony Award nomination for Best Choreographer and a Drama Desk nomination for Outstanding Director of a Musical. However, Joel Zwick’s work in films fails to match the achievement of My Big Fat Greek Wedding.

So what is it about this film, which was a one hit wonder in the careers of many of those involved that attracted viewers all around the world? There are three main factors which contributed to its success, firstly it’s a romantic comedy secondly, it’s a comedy involving families and weddings and finally it’s about the difficulties faced when two different cultures collide. My Big Fat Greek Wedding was released at a time during which the romantic comedy genre, although it had existed since the 1920s, was gaining in popularity and production. In the ten or so years prior to the release of My Big Fat Greek Wedding the most successful romantic comedies were dominated by Julia Roberts (following the staple rom-com Pretty Woman in 1990) including My Best Friend’s Wedding (1997), Runaway Bride (1999) and Notting Hill (1999) and other white American actresses alike, including Meg Ryan (When Harry Met Sally 1989, Sleepless in Seattle 1993 and You’ve Got Mail 1998) and Cameron Diaz (There’s Something About Mary 1998). Although Jennifer Lopez’s The Wedding Planner (2001) and Maid in Manhattan (2002) provided a glimpse of a culture that was different from the one which had come to dominate the films above, it didn’t feature as prominently nor was it as central to the plot as the Greek culture is in My Big Fat Greek Wedding. As a romantic comedy My Big Fat Greek Wedding undoubtedly attracted a fair number of female audiences in need of their latest fix of a happy ever after.

As a comedy focusing on a large extended family, with a wedding thrown in, just in case they don’t see enough of each other, My Big Fat Greek Wedding is a film which appealed to people of different cultures because of the family element. Around the time My Big Fat Greek Wedding was released, the image of a large family appeared also in East is East (1999) and Monsoon Wedding (2001), which focus on Pakistani British and Indian British families respectively. What makes these films popular among different countries is their portrayal of the family, a universally applicable institution which overrides cultural differences. The clash between cultures in My Big Fat Greek Wedding, another way through which the audience can identify with the film, is shown mainly through comedy. The cultural clash in the film peaks when Toula’s father Gus (Michael Constantine) explains to his wife Maria (Lainie Kazan) ‘they’re different people, so dry, that family is like a piece of toast, no honeys, no jam, just dry’ following an evening during which the Miller’s reserved personalities couldn’t have been more obvious. The film’s focus on food is a part of culture present in many films depicting foreign ethnicities, as it’s a way for those who are not part of that culture to identify with the film. My Big Fat Greek Wedding references stereotypical Greek foods such as the meat of choice; lamb, numerous times, whilst emphasising the compulsion women in such cultures feel to overfeed everyone, ‘‘cause we’re always together, just eating, eating, eating!’. Maria’s duty as a Greek woman ‘to feed everyone’ is seen in the conversation between her and Ian when she asks him ‘Ian, are you hungry?’ to which Ian, clearly content replies, ‘Uh no, I already ate’ leaving him bewildered when his prospective mother-in-law comes back with ‘Okay, I make you something’ before placing a plate of spinach on the table in front of him.

The array of colourful Greek characters in My Big Fat Greek Wedding is one of the features I love most about the film, coupled with stereotypical clichés, its one for the ages. The opening line of the film ‘you better get married soon. You’re starting to look… old’ sets the tone for Michael Constantine’s role as the overbearing yet loveable patriarch of the Portokalos family and a lover of all things Greek, who ‘believes in only two things; that Greeks should educate non-Greeks about being Greek and that any ailment from psoriasis to poison ivy could be cured with Windex’. Lainie Kazan’s role as Maria, an eager to please Greek mother, who plays mediator between the traditionalist Gus and Americanised Toula, is an endearing portrayal of a mother who wants her children to be happy while at the same time making sure that they don’t lose their roots. One of Maria’s most memorable moments in the film is when she excitedly showcases the “fixed” Bundt cake, now complete with a flower pot to fill the mysterious hole in the middle; in front of the amazed family and Ian’s bewildered parents. Every family’s got one, crazy Aunt Voula (Andrea Martin) is possibly the funniest character in the entire film. A smaller and louder version of her sister Maria, Voula is often the character the viewer laughs at as opposed with, as a result of her memorable one-liners such as ‘what do you mean, you don’t eat no meat?... That’s okay, that’s okay. I make lamb’ and insane stories, most notably when having just met them, she frightens the life out of Ian’s parents, by telling them that following a “bibopsy” on a lump ‘at the back of her neck’ the doctor ‘found teeth and a spinal column. Yes. Inside the lump was my twin.’ This story would have shocked anyone, but considering that these were upper-middle-class, white American vegetarians for whom pastels never go out of fashion, it was lucky that a string of Ouzo shots follows.

My Big Fat Greek Wedding has influenced and been referenced in various television shows ranging from children’s cartoon series Ben 10, to American teen drama series Veronica Mars, to British documentary series My Big Fat Gypsy Wedding, with many like the latter, playing with the film title. The wide recognition of the film, especially in regards to the much loved documentary My Big Fat Gypsy Wedding shows the popularity of and interest humans have in learning about different cultures. My Big Fat Greek Wedding was a turning point at which cultures which were not widely represented, were plunged into public view in such a way that made them accessible to the mass audience, who of course are fuelled by good old fashioned human curiosity, ‘we all different, but in the end, we all fruit’ Opa!