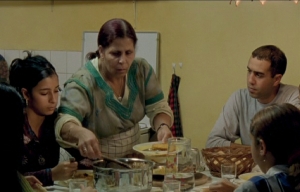 'Outside if France, in here is Algeria'. (courtesy of Pyramide Distribution)

Based on Soraya Nini’s semi-autobiographical novel Ils disent que je suis une beurette (1993) and directed by Philippe Faucon (apied noir director), the film narrates the identity struggles of 15-year-old Samia, who grows up in the banlieue of Marseille, intensely oppressed by her eldest brother Yacine, who has been designated by his father to act as the head of the family while he is in hospital.

Except for Samia’s older sister Amel, who runs away to live with a white Frenchman, the rest of the sisters are at the mercy of their brother. Yacine is a victim himself, unable to find employment in a society in which beurs do not enjoy the same kind of opportunities as their white French peers. To compensate for his powerlessness and marginalisation in society at large, Yacine rules despotically within the confines of his claustrophobic family home. With nothing else to do he polices his sisters’ every move to ‘protect their honour’ and enforces the traditional gender roles expected of Muslim girls and women through verbal abuse and physical violence. Not even his mother, herself a staunch supporter of Maghrebi traditions, dares challenge him. The film’s turning point occurs when the mother takes Samia and one of her sisters to a gynaecologist to have their virginity checked. Samia does not succumb to this humiliating examination and is, at last, successful in asserting her autonomy and dignity. Samia’s courage in turn strengthens her mother’s resolve to stand up to Yacine and to insist that her daughters will resume their schooling after their return from a holiday in Algeria. The film ends with Samia and her mother and sisters on a big boat heading for Algeria.