02. Macho Italiano: Hollywood’s Italian-American Fathers - Why Are They So Awful? 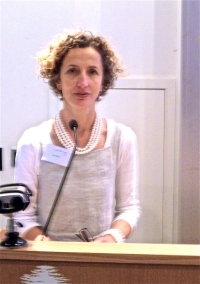 This keynote lecture was presented at the conference The Diasporic Family in Cinema  on 21 May 2011 and was introduced by Dr Daniela Berghahn (Royal Holloway, University of London).

Abstract: Stereotypes abound when it comes to cinema's portrayal of Italians and in this paper I will focus on one particular archetype: the immigrant Italian-American father of Hollywood cinema, selecting examples from across the decades to illustrate how American cinema has remained, in this respect, as unreconstructed as the stereotype it constructed and promoted. Gino Monetti in Joseph L. Mankiewicz's 1949 film House of Strangers is an opera-loving self-made, self-styled banker, whose naive generosity lands him in jail from where he enters into a vengeful feud with his two younger sons; Tommy de Coco in Robert Mulligan's Bloodbrothers (1979) is an ignorant, adulterous, inarticulate construction worker who beats his wife and is finally abandoned by his sons Stony (played by a young Richard Gere) and Albert; two fathers in Spike Lee's Jungle Fever (1991) - Angie's and Paulie's - offer particularly unsettling portraits of working-class Italian-American fathers as controlling and macho that raise rather than solve the issue of inverted racism. And then, of course, there is Vito Corleone in The Godfather. With references to these and a variety of other films in which the Italian-American male and father is more or less brutish, simple or misguided (Saturday Night Fever, Moonstruck. A Bronx Tale, Mambo Italiano) this paper will explore the stereotyping of the Italian-American immigrant father. Vito Corleone might tell his son Michael 'I never wanted this for you', but Italian manhood, like the organised crime it perfected, is virtually impossible to escape from.