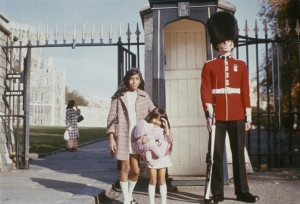 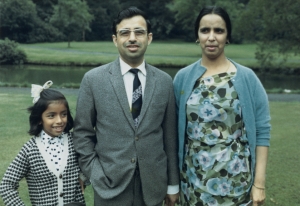 In 1965 Yash Pal Suri, a young doctor, left India for the U.K. with hopes of improving his family’s life. The first thing he did upon arriving in England was to buy two Super 8mm cameras, two projectors and two reel-to-reel tape recorders. He sent one of each to his family in India, and kept the others for himself. Over the next forty years, through regular mailings of his filmed and taped thoughts and observations, he shared his new life abroad with family members back home, providing a unique record of the eccentricities—and occasional racism—of his new English hosts. Back in India, his relatives, in turn, responded with their own “cine-letters,” sending tales of weddings, festivals and village life, along with impassioned pleas for his return.

In addition to home movies, I for India, directed by one of Suri’s three daughters, uses archival and contemporary footage and excerpts from BBC TV programs (including The Dark Million, The Immigrant Doctors, and The End of the Line), which chart the changing national mood about immigration over the decades, from bemusement at the strange customs of the South Asian newcomers, to fears of British culture being “swamped,” to right-wing protests demanding the expulsion of “colored” immigrants.

By the end of the film, as Suri and his wife communicate today via webcam with a daughter who has relocated to Australia, I FOR INDIA becomes not only a bittersweet time capsule of cultural alienation, discovery, racism and belonging, but also a contemporary exploration of universal, emotionally compelling themes of family separation and the quest for personal happiness, wherever it may take you.

Chosen as part of the official selection at the 2006 Sundance Film Festival, I For India is an emotional and bittersweet documentary by Sandhya Suri which intimately explores the migratory journeys of her family, from their initial emigration to England, return to India, back to England again, and beyond. For anyone, myself included, who has experienced the traumas, joys, and frustrations that come with relocation from one country to another, this film will have immediate resonance. For those who haven’t, it is a fascinating look into migration from the point of view of a family trying to understand their national identity and find a sense of belonging. I For India asks questions such as: if one comes to be more at home in a foreign country, can one still retain a sense of loyalty and patriotism to one’s home country? Where does one truly belong?  Sandhya Suri, the family’s youngest daughter, was inspired to create this, her only full-length documentary to date, on the basis of Super 8 home video footage and audio-letters exchanged between her father in England, and his family in India since the 1960s. Skilfully combining this material with more recent documentary footage and interviews, Sandhya tells her family’s story, opening her debut documentary with a dedication: ‘To my parents’.

We are first introduced to Sandhya’s parents in a scene showing their typical lives in 2003. Yash is a member of the Darlington Camcorder club, and he shows other members of the club his holiday footage of Egypt. His wife Sheel, attends a meeting at a woman’s club, and chats to the other women there. Later in the film, we are shown footage from a 1966 BBC television program entitled ‘The Dark Million’ in which, accompanied by corresponding footage, the commentator insists that immigrants in Britain ‘have often established little islands of their own culture’ and that ‘they create an atmosphere of foreignness’. These establishing scenes of Yash and his wife stand in contrast to this. These two Indians seem perfectly comfortable in these environments interacting with English people. A slightly sour note creeps in, however, when a man gives a speech at the women’s club about his impressions of India. He limits his observations about the country to showing images of a poor district, a beautiful ocean which is so polluted that no-on will swim in it, and an Indian shepherd who allegedly dislikes the British. He declares that ‘even the poorest houses in India have got televisions’ and that they all want to look like Julia Roberts or Brad Pitt. He makes very generalizing statements such as ‘you don’t see many fat, poor Indians’.  He concludes by saying that Indian people are kind, and wondering whether, if an Indian stranger walked down the road in his village, English people would be so welcoming. We are shown Sheel’s reactions to this speech about her country, and she does not seem very impressed, glancing at her watch as he speaks.

The inclusion of this speech as well as the cleverly-timed use of archive footage from various British television programmes dealing with the issue of immigration serve to remind us of some of the attitudes that the Suri family have been up against as immigrants. Two of the more unsettling examples are footage showing a Labour Front march against immigration, and 1970s bulletin promising people that the government is taking steps to control immigration. Margaret Thatcher herself makes an appearance here, explaining that English people are afraid of being ‘swamped’ by people who are culturally different. There is a striking contrast between the views of immigrants presented in this television footage, and the actual reality of the lives of this immigrant family, who appear to have integrated themselves into Britain quite comfortably. However, the commentator of a program dealing with immigrant life insists that immigrant communities set themselves apart, and that ‘they speak to each other in their own language’. This contrasts sharply with a later moment in the film in which Yash, in an audio-letter, apologises to his father for the fact that he has grown more accustomed to speaking English, and subsequently even forgets words in his own language.

After the introductory scenes in 2003, we are taken back in time. Old photographs accompany Yash’s commentary as he explains the circumstances under which he left his country and came to England. Yash Pal Suri was born in Punjab, India in 1933 and graduated as a doctor in 1958. In 1966, aged thirty-three, Yash became part of the ‘brain drain’ of India; one of many qualified doctors to leave India in search of better training and work opportunities. Along with his wife, Sheel, and their daughter Neeraj, he moved to England. ‘I wasn’t the only one to leave’, declares Yash, ‘and not the only one who believed in the myth of return’. Throughout the film, the nostalgic use of popular Bollywood music will convey a sense of longing for the home that has been left behind. One poignant moment shows Yash listening to a recording of a Hindi song, and singing along to the words. A major problem that Yash encountered upon arrival in England was a difficulty in communicating with his family members in India, but he devised an ingenious solution: He brought two sets of video equipment, keeping one for himself, and sending the other to India. For many years, the family communicated by sending video footage and audio recordings back and forth between the two countries. Years later, his daughter Sandya, who studied at the National Film and Television School, would realize that here was the perfect material for her first documentary.

The Super 8 video footage begins in the 1960s, following the early days of the family’s settlement in England in a lyrical manner. Initially, the mood seems quite cheerful. Neeraj plays in the snow and describes the friends she has made in school. The nurses with whom Yash works dance and joke around. Yash gives a tour of their house. The curious family in India want to know about the climate, the people, and about ‘funny events’ in the lives of their relatives abroad. Yash promises that he will have much more to tell his family when they return to India. The decade of the 1970s opens with home-video footage of a party and dancing, yet an increasing sense of uncertainty now pervades the film as Yash seriously begins to consider the pressing question: ‘Now, what is the future for us?’ At the same time, the home-video footage from the family in India becomes increasingly affecting, filled with heartfelt pleas that Yash return home. However, through Yash’s audio-recordings and footage, we come to understand that he is no longer certain where ‘home’ is. The film now carefully explores the difficult choices the Suri’s must make in terms of deciding their future and determining where they belong, and the international journeys that their decisions will take them on.

At this point, the tone and style of the film changes somewhat; the use of super 8 home video footage gives way to filmed interviews, with the family members discussing their experiences of an attempted relocation to India, with Yash describing his initial optimism and his joy upon immediate arrival. Interestingly, he likens it to Tom Jones’ ‘Green Green Grass of Home’, suggesting that, while he still sings along to songs in his own language, he has also been touched by popular British culture and music.  Perhaps most interesting here are the retrospective reactions of the two oldest sisters, Indian-born Neeraj and British-born Vanita, who were eighteen and twelve respectively upon arriving in India, while Sandhya herself was only five or six. Neeraj maintains that she found life in India boring and mundane compared with life in England. Vanita, on the other hand, offers a much more positive account of her experiences. She states that she enjoyed the fact that she fitted in at school, sharing an ethnicity and looking the same as her classmates, rather than feeling ‘like a misfit’ as she had in England. Ultimately, though, the sense of uncertainty about where this family truly belongs continues to pervade the film, and, as a result, so does the migratory journey.

The final part of the film shows that the restlessness experienced by Yash now takes hold of his middle daughter, Vanita. The parents, with the hindsight of their own experiences, accept that their children have their own destinies, and may move on. We also become aware that, in so doing, Vanita will experience the same joys, anxieties, uncertainties, and difficult decisions as her parents before her. Thus, a new cycle begins with a new generation. The methods of communication have changed, however: in 2005, an internet webcam has replaced Yash’s beloved super 8 video camera as the favoured means of long-distance communication.

Finally, Sandhya’s documentary allows her father the last word. The film concludes with Yash insisting that no matter where he chooses to live, he will always love his original home country. I For India offers a highly insightful and fresh perspective on immigration and migrant existence. Despite the fact that the film is short, one gets to know this family intimately and develops an attachment to them. Through the well-timed use of British television footage, the film reminds us of the potentially hostile attitudes the Suri family faced, while also depicting their friendly interactions with neighbours, colleagues, classmates and so on. Although, the film may have greater resonance with some viewers rather than others, I For India is enlightening and will not fail to touch everyone in some way or another.